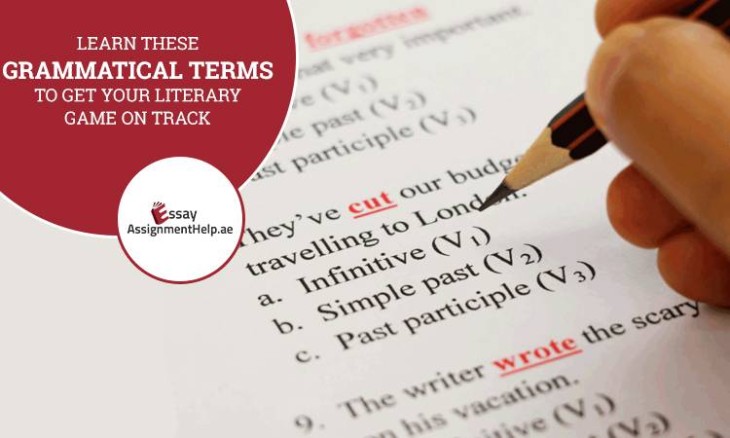 “Grammar, which knows how to control even kings.”

As the famous French playwright and poet aptly puts, even the all-powerful monarchs are not above grammar. While nouns and adjectives, active and passive voice, and subordinate clauses are some of the most common grammatical terms you may have come across as a student, things get a bit difficult at the higher levels. If you are a student of language or literature, then the chances are that you have to use terms that go beyond the basic grammar concepts.

Basic grammar terms comprise of those we learn about in middle school and the foundational courses at high school. Moving up the academic ladder, there are a few more grammatical terms that you need to be acquainted with. And this blog aims at helping you do just that. Read on to find out why it is important to brush up on your grammar from time to time and learn all about some of the essential grammatical terms for your upcoming literary papers.

Imagine trying to build a house of wood, but you don't know how to use nails or glue. How will you be able to build the house successfully? Even if you somehow manage to raise a structure, it falling to pieces will be a matter of time.

Since correct grammar is essential to mastering English, it is best that you learn all about the definitions of grammatical terms in the language. More than 50% of recruiters all over the world say that they are more likely to reject an application if it contains poor grammar. So, learning grammar is not just about answering, “Which of these terms is defined as the repetition of a grammatical structure in poetry?” precisely. Accurate grammatical skills will take you places when the time comes to step out of the academic realm and into the job scenario.

When referring back to a word or phrase used previously in text or conversation, we use an anaphoric. Pronouns in English usually take in the anaphoric form. Anaphoric terms thus depict words and phrases that have been referred to in the text before. The singular noun or pronouns of undetermined gender can take on anaphoric forms. Abstract concepts such as time can also be explained using anaphoric terms.

Here are a few examples to help you understand everything about the use of anaphoric terms.

Anaphoric term: they (to signify “somebody who forms a government”)

Anaphoric term: at that time (to signify the chaotic time)

Here are a few examples that will help you understand what antecedents are and their usage in a sentence.

Antecedent: Michael (later signified through the anaphoric term ‘his’)

Appositions are clusters of grammatical units (like nouns or noun phrases) in a sentence that refer to the same person or thing. They have the same role in a sentence, and have similar functions in a conversation or text.

Here are a few examples to help you understand the concept better.

Apposition: his brother and the minister (both signify the subject of the sentence and refer to the same person)

Apposition: Oxford town (both the terms signify the same place, i.e. the city of Oxford)

Also called a copula, this one links the subject of the sentence with a complement. The copula helps the sentence give away more information about the subject. English denotes the verb forms of ‘be’ as the main copular verb. But it can also take on other forms like ‘seem’ and ‘remain’.

Here are a few examples of copular verbs in English.

Copular verb: is (helps to provide more information about Terrence, the subject and links him to the complement “established baker”)

Copular verb: remain (links the subject ‘letter’ to the complement ‘mystery’, helping one get more information on the former)

Here are a few examples of the dative case that can help you grasp the matter better.

Grammatical terms that take on different forms according to number, gender, or tense are called inflections. Languages that use various forms of the root word in different contexts according to the number, gender, and tense are called inflected languages. While Old English had plenty of inflected forms depending on case, gender and number for nouns, and person, number, mood, and tense for verbs, modern-day English has a lesser amount of inflections. With the use of auxiliary and modal verbs and propositions, the use of inflection became rarer. However, some inflections are still used in English to differentiate between the many forms of grammatical terms.

Here are a few examples to help you understand inflections better.

The smallest unit of a language that cannot be broken down into smaller parts is called a morpheme. Words in English sometimes consist of prefixes, stems, suffixes, and combining forms. They can also be made up of a single morpheme as well.

Here are a few examples of morphemes.

When two or more words are used to express a meaning that can also be conveyed in a single word, we use periphrasis. Periphrastic words sometimes replace those which could have described using an inflection or inflected forms of the word.

Here are a few examples of periphrastic words.

Pleonasm is the use of more words in clause or phrase than necessary to express the meaning. It is sometimes used to establish something emphatically or with clarity, but is mostly seen as a fault in style.

Here are a few examples of pleonasm that can help you understand the concept better.

Pleonasm: seeing with one’s own eyes (when ‘seeing’ would have sufficed)

Here are a few examples of genitive cases in modern-day English.

Genitive case: master’s (used to denote the level and possession)

Here are a few examples to help you understand the vocative case better.

Now that you know all about the essential grammatical terms, you can rock the next literary essay or assignment with ease. You can bookmark this blog for future reference whenever you need to have a quick glance over the definitions and examples of important grammatical terms. From dative case to inflection, learn them by heart so you can identify them in a flash the next time you read or write a literary paper. If all else fails, you can always fall back on the stable assistance of online assignment writers with the finest credentials. Good luck with those literary assignments!

Need a hand with grammar? EssayAssignmentHelp.ae can come to the rescue!

If you are stuck over a tricky literature assignment, then we have your back. Our experts at EssayAssignmentHelp.ae can provide you with the right kind of assistance when it comes to your assignments. Having a team of over 1500 PhD-qualified scholars, we can help you with your assignments at the blink of an eye. In-depth knowledge, insightful research abilities and knowledge of the academic conventions help us to provide the best of assignment assistance for all levels of study.

Essays, term papers, case studies, presentations, homework solutions, dissertations – you name it, we have it. From writing your papers from scratch to revising completed papers, we can do it all at EssayAssignmentHelp.ae. Check out the amazing benefits that have helped us become the number one assignment essay help provider in the UAE.

So, what are you waiting for? Get in touch with our team of experts right away to get prompt assistance with your assignments right away!